Warning: "continue" targeting switch is equivalent to "break". Did you mean to use "continue 2"? in /home/xxinagvm/public_html/wp-content/plugins/jetpack/_inc/lib/class.media-summary.php on line 87
 Renders – daveleack.com

I like glowing things. Little floaty lights make me smile.
With that in mind, I started having a play with some particle effects that I could “glow up” in the compositor.

In short, I created a plane to use as a dynamic paint canvas, set to vertex and wave mode so that the particles made ripples in the surface when they connected with it, then I made another plane above it and set it up as a dynamic paint brush, set to particle mode, and added a particle system.

I then created a small icosphere and used it as the particle duplication object, lessened the effect of gravity and cranked the random initial velocity.

I set up an emissive material for the particles and a glossy/glass mix for the canvas surface, gave the particles lots of frames to fall down, rendered it out and composited in some blurring on the emission pass and a few other bits to get the look I was after.

The result is below 🙂

So after that, I was reading some bits and pieces and was reminded about the Particle Instance modifier. I had a quick play and used that, and hair mode on the emitter and ended up with some pretty nice tendrils which worked well with my materials and compositor setup in individual frames, an example of which is shown below.

What they didn’t work very well with was the dynamic paint, which I’m putting down to my settings, or the fact that most of the interpenetration of the tendrils and the canvas is edge-face rather than vertex-face. (Further info on that if requested.)

The result was underwhelming, but posted below for completeness.

I built a model of a C-64 in blender some time ago now and had been holding off putting pictures of it online.
I didn’t get around to modeling the ports but other than that I think it looks pretty decent.
The keys were a pain in the butt, and I ended up having to redo them a couple of times.
Also, I hadn’t realised (silly me) that there were a couple of styles of case for the 64. The first one that I built (kind of more wedge shaped, like an Amiga 500) was for the C-64c I think, and that had different keys that I didn’t have any texture source for, so I ended up redoing the case to fit the keys rather than the keys to fit the case.
So, here it is.

I had a quick go at modelling a fedora this evening. I’m hoping it’ll become a prop for a bigger project, but I need to think it through and make sure I know what I’m doing (which is rare). 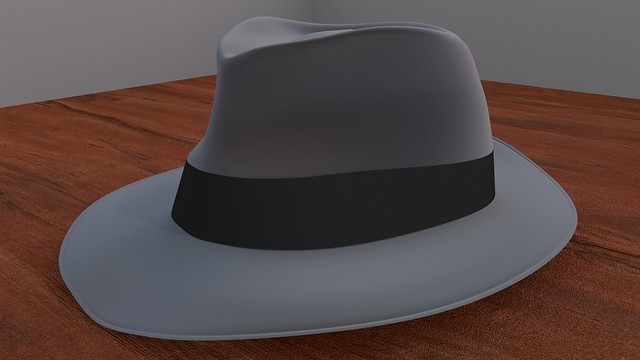 Some rendered images follow. They’re all a bit random. I wanted somewhere to put them and aside from the fact they’re currently hosted on my flickr photostream, this is as good a place as any.